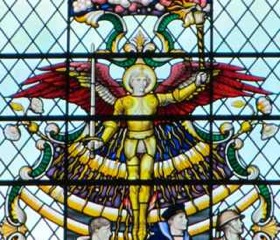 Archangel Michael the liberator in the Salisbury Cathedral

Click here to listen to the Prayer for Today-Accepting the Guidance!

The other day I was traveling from Salisbury to Glastonbury and I had no idea how to get there. People said I’d have to take a combination of trains and buses. I took a train from Salisbury to Bristol. The train was quite late, so it took much longer than expected. I was told to catch a bus from there.

No one at the train station in Bristol seemed to be able to know exactly how to get the next bus. I asked a bus driver who told me to go down to the main street below the train station. The bus driver there told me to walk or take the bus to the Centre of town. I was told it was a 15 minute walk or a 10 minute wait for the bus. A walk sounded good, so I did that.

It turned out that the walk was closer to 30 minutes, even at a brisk pace. Carrying one bag and pulling another it was a bit of a haul, but fortunately I found someone who walked me most of the way there. Had I known, I would have taken a taxi from the train station where they were lined up and waiting. Oh, Well!

Then in Bristol, I was told that I’d have to take two buses. The first bus was quite late and was a long, slow local bus to Wells and then fortunately It was a shorter trip from Wells to Glastonbury.

A trip that would have been 90 minutes by car ended up taking nearly 5 hours. When I was on the first bus, I felt this really intense energy suppression coming over me. It felt as if my vibration was being lowered incrementally as we drove along. I was feeling more and more uncomfortable, agitated even.

I’ve learned to ask for assistance from the invisible Spirit all the time – including information – so, I asked “what’s going on here? Why is my vibration lowering like this?” The answer I got was that as I was driving through these small towns, riding on the bus that has been taking this pathway daily, I was experiencing the thought forms of people who are entrenched in routines. I was guided to look around and notice that the buildings were so old. People had been living in these homes, and these neighborhoods for generations. I felt the energetic patterns wrapped around almost every thing and every one.

From there, more began to unfold in my awareness – I realized that I’d been brought along this route for so many reasons.

1. To further inspire me to pray and know the truth for all humanity –          we ARE liberating from the old thinking of lack and limitation.
2. To be further inspired to keep sharing the tools and tips about          how to align with Divine Will and live in accordance with Love.
3. I was reminded that other people may not thinking as I think and          taking that into consideration will ease my journey through life.

When I was asking people HOW to get to Glastonbury, I was thinking that people would tell me the easiest and swiftest routes. They were thinking that I desired the least expensive route. I would happily have paid a $5 taxi ride to the bus station. In fact, for my return trip, I skipped the bus and hired a taxi to take me to the nearest most direct train back to London.

My invitation to you today is to really consider asking for Divine Guidance. Ask for assistance. You can even ask “if I knew what to ask, what would I ask?” Look to release the old thinking and discover new opportunities. When you are dedicated to being a loving presence, EVERY THING will work together for your good. When you work for Love you will always be supported in a further realization of good. Go for it!