Loving What Is, Even When I Don’t Like It! 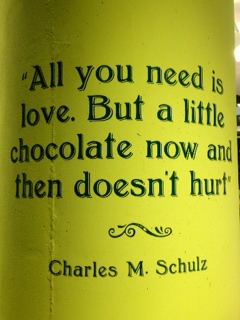 Words of wisdom from Snoopy's friend.

Click here to listen to the Prayer for Today-

How interesting that last week in the classes at http://livingacourseinmiracles.com/ our topic was – Releasing Resistance, Loving What Is, Even When I Don’t Like It! and my experience for the entire time since then has been one long testimony!

Right after class on Friday I left my home in Los Angeles to travel to Athens, Greece. I was to fly from Los Angeles to Phoenix, AZ to London, to Athens. Well, every part of that trip fell apart.

First, my flight from Phoenix to London was delayed. I asked the man at British Airways if I should go to the gate or wait it out at a restaurant. He suggested the restaurant. I watched the flight status board to make sure the flight wasn’t cancelled, then as I headed to he gate – 3.5 hours later – I learned the flight had been cancelled 1.5 hours before.

Now, check this out – if I had gone to the gate, I would have stood in line for nearly 2 hours with the rest of the travelers and listened to all their upset and complaining (which really means I would have been standing on line to be rerouted and put up at a hotel while praying for all the upset people). Instead, I got a lot of work done on my laptop while enjoying the relaxed atmosphere in the restaurant.

Then, because I was the very last one to show up at the desk and get my hotel assignment – I got one of the better hotels – a Hilton. AND because I was one of the only ones in line for the shuttle van to the Hilton, I got to right there, while others were still waiting at the curb when I was checking into my room.

The best British Airways could tell me was – show up around 3pm and we’ll see what we can do.

There are HUGE advantages to being willing to go with the flow and be unbotherable. I always ask the angels to help me, guide me, teach me and protect me. I pray for clarity to see things rightly.

I knew I would completely miss my direct flight from London to Athens, so I rebooked it when I thought we were delayed. Then when the flight was cancelled, I had to rebook it again. I went to bed around 12:30am and got up around 6am to see if the airline had one clue as to what they were really going to do with two fully booked jumbo jets worth of passengers having had their flights cancelled.

I called the airline and they said that I’d be able to get on a flight at 11PM that night. Which meant that I wouldn’t get to Athens until 2 more days. Interesting!

I decided to see if they could route me through Chicago or New York – they did! Now, it gets even more complicated because I had a totally separate ticket on a different airline using mileage to get me from London to Athens (I wouldn’t be able to afford the trip if not for my friend hosting me and my miles carrying me there.) The trick was to get my baggage sorted in London and routed to Athens when I was on a separate ticket. To make things more challenging, they made me check my bag at the gate in Chicago and I forgot to tell them to send it over to Lufthansa and on to Athens. Believe it or not – I had to fly from London to Frankfurt to Munich to Athens – another day of airports.

Once in London I managed to get the help of several lovely people at Lufthansa – great airline BTW!! – and MIRACULOUSLY both my bags were located and made it onto my plane! Woo hoo!

Now, this story might only be mildly interesting – but the thing I’d like to share is that, while I did have a moment or two of frustration – 2.5 hours on the phone with the airline to rebook everything and I got cut off after being on hold for 25 minutes – and also my suitcase somehow gained 2 pounds although I didn’t add anything to it – which made it overweight – I felt quite peaceful the entire way and everything ultimately worked out.

The entire time I was making the trip I felt that I was in a healing mode. I have felt this so many times! Whenever life presents these kinds of changes and challenges, the spiritual practice of patience, kindness, acceptance, willingness and gratitude brings SO MUCH HEALING! It might seem hard to believe, but I can FEEL it happening – the unwinding of false beliefs of separation. More and more, I feel the sense of being in the Oneness! FEELING that I AM in the flow of Love requires me to choose that and make no other meaning of my experience. Nothing is being done TO me – I am free to choose – even when it looks like I’m not!

I didn’t wish to have 48 hours in airports and in transit, but so what! This HAS TO BE my good. It has to be right where I am at all times! And I have learned a whole bunch of useful things.

I learned that the airlines have an alliance and they’ll work together to help you out even though they don’t have to. Let them know what the challenge is and ask if they can help, People like to be truly helpful.

I learned that United Airlines could have charged me three change fees at about $150.00 a pop, but they only charged me once, and they retrieved my bag for me from American Airlines in London so that I didn’t have to go through customs to claim it in baggage claim. They didn’t have to help me.

I learned that Germany has the best airports! They are so quiet and peaceful and they don’t have any warnings about orange alerts – no constant pestering about fear and danger. I even got some delicious ORGANIC frozen yogurt in Munich! And free wi-fi too.

And then, when I arrived in Athens – it turned out that my 2nd bag wasn’t with me and it’ll be forwarded to me on the island of Andros – where I’m traveling to today. My friend Gina met me at the airport with a gift of fresh baklava – a favorite of mine! And what I know is that I am SO blessed. I have a friend and we’re able to be together. That’s a blessing.

Complaining only makes me a crap magnet. Being grateful and being willing makes me a Love Magnet – that’s my spiritual practice and it heals the negativity and restores me to my true identity and this is what I most deeply desire! I’m going for it! I’m not 100% unbotherable, yet, but I’m on my way!