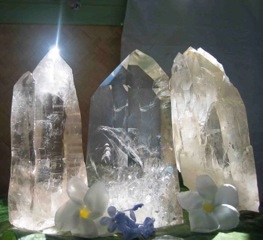 Beautiful quartz crystals on the altar in Hawaii

When I was starting ministerial school in 2001, I thought that part of “growing my consciousness” was to become a “master manifestor.” I believed that manifesting whatever I wanted was evidence of my success.

I remember when the movie “The Secret” came out. It was 2006, the year I graduated from Agape’s ministerial school in Los Angeles and Michael Beckwith, the founder of my spiritual community went from being my teacher to world famous.

I remember at the time that so many people really got excited about FINALLY being able to manifest everything they wanted. It makes sense! The ego loved it and it felt so spiritual! It seemed as if the message was: at last, it’s spiritual to want things!

Do you remember what you were thinking when you saw “The Secret?”

It was at the time that movie came out that I was becoming crystal clear – all I desired was to know God.

I was so DONE with looking outside myself.
I really only wanted to manifest Peace of mind, and a complete sense of Freedom.
I decided to DEVOTE myself to that. I DOUBTED that I could do it, but I decided to go for it ANYWAY. I had reached the place where I realized there was nothing else that really mattered.

I had a LOT of clearing to do in my own thoughts and beliefs and that work was absolutely EXCRUCIATING. It was EXHAUSTING.

AMAZINGLY, and most UNEXPECTEDLY, I began to experience real breakthroughs that actually allowed me to live with greater ease and grace – WOW! I learned a secret that no one was talking about and that’s what I share in My #1 Tip for Spiritual Success – if you missed it, you can get the Mp3 download or replay – my gift to you – click here to register and receive my #1 TIP class!

It’s not about manifesting – it’s about ACTIVATING YOUR POTENTIAL!

I never would have thought that what came next would bring me the Freedom I desired, but that’s a whole other story … stay tuned!