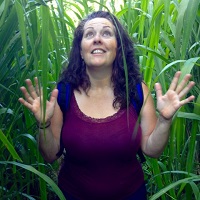 In Part 1 of this 3 part series I was sharing about how it’s like we’re on a rocket ride and we’ve used up that first booster rocket. It’s time to eject that puppy with Love and gratitude and fire up the next booster to carry us through this intensity right now.

Yesterday, in Part 2 of this series I was sharing about how we’re all on a hero’s journey and that it can be SO helpful if we recognize that AND discover where we are in the journey. From what I can tell – we’re at GO time! It’s time to put up or fail.

Failure is not an option.

We’re divinely supported and guided and Spirit doesn’t even know HOW to fail. So, failure’s not an option – phew!

What IS an option is struggling and suffering – and wouldn’t you like to avoid that? Me too! Keep reading!

I the last few years since December 2012 when I felt that first booster lifted me off the ground, I’ve had a couple of main themes playing out. One is that I was traveling much of the time. I’ve been going from place to place across the US and Europe. And a fair part of that time had me living with family (or friends that were like family). I felt that part of the traveling was to allow me to do certain energetic work in those places, activating certain energies and I went where I was called and did what Spirit guided me to.

Through it all were these constants:
1. Mother Earth, her constant Love and support no matter where I went.

2. Divine Guidance and support, constant no matter what.

3. Feeling good about what I’m sharing with others. The more my mind opens and releases the attachments, the more clarity I have to share.

4. Whatever doesn’t serve me – habits, beliefs, relationships, things – will never serve me. No more managing and coping. I’ve let them go, or I AM letting them go. I choose to fly.

For me, it’s clear – fly or die. There’s no middle ground anymore.

In the last three months, I’ve had a couple of occasions where I saw a clear gateway to another script for my life. I’ve had at least two clear moments where I saw a turning point I could take. In hind sight, I’ve probably had this same choice MANY times, but the temptation wasn’t in my heart, so I didn’t see the choice present itself.

The turning would have been to play small. To “rest on my laurels.” A lot of people do this, particularly teachers. They reach a certain level of “expertise” and they rest on it. They continue to re-hash it in their teachings and write about it in their books. They decide to “cash in” rather than continue to keep growing, exploring, awakening.

In 2012, I came out of the “closet,” so to speak and let it be known that I AM on a path of awakening and enlightenment. I’m not interested in having another incarnation. I’m interested in transfiguration, ascension and awakening and staying here, in this incarnation, supporting others who are waking up too. This is what my ministry is dedicated to. This is why I share practical tools and tips that really work when they’re applied.

I invested many years of my precious life studying spirituality and gaining very little insight in the process. Studying spirituality kept my ego really busy. It reinforced my intellect (run by the ego) and I got a lot of ego praise and validation for being such a good student. My heart opening is not an intellectual journey. Heart opening is what I’m interested in now.

Everything changed for me when my attention was shoved into a corner of my heart and mind where there was nothing but anger, resentment, hurt, doubt, worry, betrayal, ugliness, guilt, shame, jealousy, decay, excrement and vicious, mind-bending fear AND the Truth. I couldn’t stand my own mind. I couldn’t stand living as “my ego.” I hated it. I hated the dark, putrid, density of my own mind, and I was afraid to tell anyone how I felt, and what I thought because it was just so UNSPIRITUAL.

And now, I’m SO VERY GRATEFUL that it got that bad. Because that’s what it took for me to change my mind and wake up to my destiny. From that place of ugliness, the prospect that the TRUTH could set me Free was very appealing. I decided to go for it, to choose true awakening rather than intellectual spiritual pursuits.

I had been studying spirituality for such a long time, but I was only applying it marginally to my life – although I wouldn’t have admitted it because I wasn’t willing to see it. Honestly, NO ONE I knew was really going for awakening.

I’d been hitting the snooze button for so many years, that it took a giant explosion in my life to get me to stop managing and coping.
Almost every part of my life, family, friends, work, spiritual community, romance, finances – everything except my physical body – blew up on me. On the surface, it seemed like a maze of betrayals. My managing and coping strategies couldn’t keep me going. I was overloaded.

Ask yourself: What kind of pressure does my Higher Holy Spirit Self have to create for me to choose to wake up to live my true Divine Potential, my Divine Destiny? What kind of butt-kicking do I require?

That booster is going to look differently for each of us.
The thing that I’ve realized, and am so grateful for knowing, is that making the changes my life required was SO MUCH EASIER than struggling.
If only someone could have told me.
That’s why I am telling you now.
Look at your life – what do you need to let go of?
What if you KNEW it would be so much easier than you thought – even though there would be times it felt really hard, most of the time it would be easier than you think?
How would you like to FEEL 3 months from now?

Would you like to feel more Peace, more Harmony, more Prosperity, more Freedom?

You can’t get where YOU’d like to be with managing and coping strategies. It’s literally IMPOSSIBLE to get there with managing and coping strategies. You MUST learn to live a way that’s more NATURAL to YOUR way of being – like Maria, like Eliza, like Luke and Neo. It’s EASIER to live in your genius, in your naturalness. It’s easier to be miracle minded.

And you’ll be guided as to how to do that if you’re willing.

So, what do YOU have to let go of to give yourself permission to live in your True Identity, and in your naturalness?
You know the answer, be willing to take divinely inspired action and choose.
Say this whenever there’s doubt:

I AM Divinely Guided, guarded and directed to the highest, best and most loving choices for my eternal Freedom in the Light!

Ok, there’s a few things to let go of.
I’m being honest here.

There’s false beliefs, false behaviors, pretending and lying and B-S-ing that has to fall away. And it’s LETTING those things fall away, ALLOWING them to fall away that lightens your load and gives you ACCESS to the next set of rocket boosters!

The hero realizes he can EITHER try to grab some treasure OR he can escape with his life. The villain tries to do both and dies painfully, killed by his greed. At some point later, the hero realizes, there was a gem stuck in his pocket, his boot, his hat and he discovers his good fortune at the exact moment of his need or his delight. Classic.

This is classic storytelling, and maybe even cliché, because it’s how life ACTUALLY is. You will discover the gem when you most need it. Being greedy and trying to grab as much as you can will bring you loss.
What do you need to let go of?

HINT: Most of the excess baggage is beliefs that aren’t actually true. Who needs those?

There comes a time when we have to let go of everything we thought we needed, including the treasures of the past, in order to be free to live and to thrive.

It doesn’t mean that we can’t bring the treasures with us, it just means that we can’t hold them as false idols and dead weights – we have to be willing to lighten our load in order to fly.

It’s much easier to eject the spent rocket of your old beliefs and fire up the new booster, than it is to let that old spent rocket drag you down or to try and undo it piecemeal. Just eject that puppy and let it go.

You get to decide what you’re interested in now: fight or flight?
Do you want to fight with the ego or fly with the spirit?

Even if you don’t know HOW to fly, it doesn’t mean that you can’t choose it. Choose to fly and you’ll be led and guided to the steps.

Because of my own personal experience right now, and because of what people have been sharing with me in the last couple of weeks, I’m opening enrollment again in my Finding Freedom Spiritual Bootcamp. The students in the Bootcamp are getting so much support to help them breakthrough the limiting beliefs and patterns that are coming up in full force.

Here is what some students are saying after just a couple weeks of being in Finding Freedom: 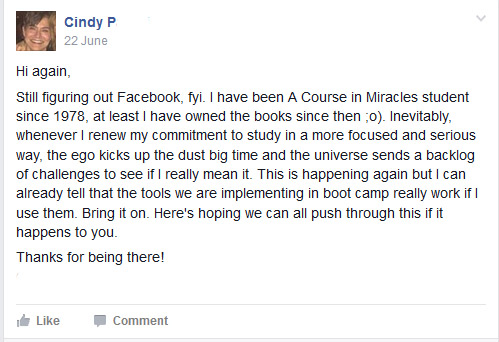 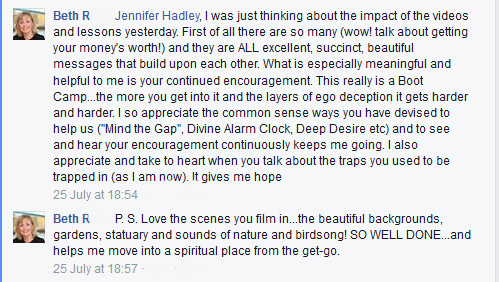 If you’d like to get more clarity on if my Finding Freedom Spiritual Bootcamp is for you, register for my free live class this week, 7 Simple Steps to Interrupt the Patterns of Fear.

I just did this class last month, but people found it so helpful that I am offering it again with live coaching. This time, I will be taking questions and applying the steps to real life issues, YOUR issues. I can already feel how expansive and supportive this class will be.

This class is structured as a preview of my classes so you can see if a program with classes like this is something that resonates with you.

Register for my FREE class: 7 Simple Steps to Interrupt the Patterns of Fear now!

We’re waking up together and I’m so grateful for that! If you’re finding what I’m sharing to be helpful won’t you please share at Facebook and twitter to let others know? Thank you!