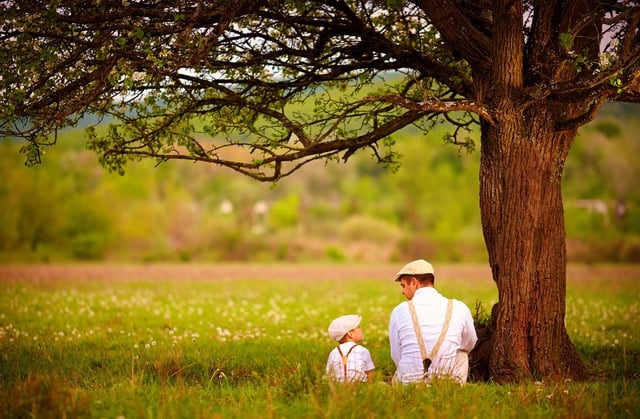 We’re facilitating generational healing all around the world.

I really struggled with lack for a very long time. Like a lot of people who were born at the end of the baby boomer generation, my parents who were raised by people who lived through WWI and the Great Depression and were deeply affected by it.

I remember my grandfather telling me that when he was a child he helped his mother with her work. She took in laundry to help feed my grandfather and his sisters because his father had deserted them and they struggled to make ends meet. At times his mother was sick and it was very hard for them. He grew up mostly not having any shoes. Shoes were a luxury for them in the hills of Kentucky. You can imagine how deeply that affected him.

I recall my grandfather telling me that one day his mother sent him to the store to get a some cornmeal and some flour and some salt. She gave him a nickel to make the purchase. It was all the money that the family had. One nickel. And he was so afraid that he would lose it and his mother and sisters would starve because of him.

I cannot even imagine what growing up in that, but with his mother’s Love and his own giant heart, he left, school and the family at age 12 to go out on his own to earn money for the family. My nephew Mikey just turned 12 last month. It’s amazing to think of how strong and resilient my precious Grandfather, Walter Thomas Hadley was.

When I was a child he was a bit gruff at times. I remember being about 6 years old and running around his house barefoot. He and my grandmother had wonderful wall to wall carpeting which was luxurious and I loved that they had such a big house to play in with my cousins.

I remember my grandfather yelled at me because I didn’t have any shoes on and it frightened me a bit. Why was he yelling at me to put on my shoes? The house is warm and the floor has carpeting and we’re in the house? Why do have to put on shoes? What did I do wrong? It didn’t make sense to my little girl mind.

I found out later that it upset him to see his barefoot granddaughter running around because, unlike his six year old self, I had shoes. We could afford shoes. I should wear my shoes. Children who don’t have shoes go barefoot, but children who do have shoes wear them. My bare feet were an affront to the decades of his laboring to provide for his family and see that we have enough.

My grandfather was what they call “a Self-made man.” He was successful in business as a salesman because he understood how dear people’s money was to them. He also was a dedicated tither. He and my grandmother gave so much money to charity they were frequently audited by the IRS for suspicion that they weren’t telling the truth about how much they gave. They had to go down to the IRS with a box of cancelled checks to prove they’d really given that percentage of their income away to charity.

My grandfather used to say “the money you give the church costs you nothing.” That was his tithing philosophy. At the end of their lives, my grandparents were multi-millionaires and I know it was because of their generosity.

And still, when I’d go to the store with my grandfather late in his life, even as a millionaire, he was looking for the early-bird special and the day-old bread, the 50% off on the dented cans, because he remembered very well the time when he literally didn’t have two nickels to rub together.

I feel honored, blessed and grateful to be part of the generation that’s undoing the pain and suffering our grandparents experienced in poverty and living through two world wars and the great depression.

As we undo the lack and limitation consciousness of so many before us we are setting all humanity free. For me, the most basic practice is to be aware of when I’m feeling fear based on lack. In that moment I can realize that I’m believing something that is false and I can give whatever it is, known or unknown, to Spirit for healing. We let the Higher Holy Spirit Self do the heavy lifting.

In truth, there is no lack or limitation in God. It’s not God’s nature. Spirit is unlimited, unprecedented, and continuous eternal abundance and prosperity. That’s our true nature.

Our willingness to let the past go is the thing that brings the change in the circumstances of our life. Let’s practice today and every day!

We did it! Our Help Shine the Light fundraising campaign is a success! Together we’ve raised $25,000 and we did it with 2 days left!!! Thank you! You can still make a contribution and be a part of our success. Thank you so very much!!!

FREE RELATIONSHIP CLASS Now is the time for us to decide to be successful in your relationships. It’s a decision. And no matter how incompetent we might feel there are simple changes we can make. It’s easier than you might think! Check out my free class – the download is available NOW! Relationship Healing & Harmony FREE class.