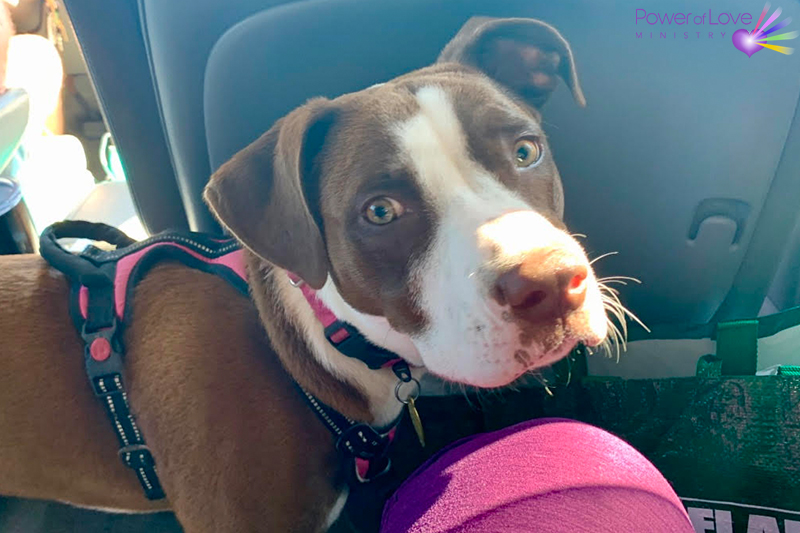 This precious puppy ate my $60 slipper. Even though she’s definitely guilty, she’s still so innocent.

Click here to listen to the Prayer for Today-Self-Forgiveness

Bobbi, my brother’s new puppy dog, Bobbi – just about 8 months old – ate my slipper yesterday.  Sigh.  I really liked that slipper and they don’t make them anymore.  Isn’t that how it goes sometimes?

I have to say, it gave me a moment of feeling pissed.  All attachments cause suffering – that’s the teaching of Buddha.

Of course, I was annoyed with myself for having taken it off in a place where she could get it.  Life!!  I could have been upset the rest of the day – but what good would that do?

Okay, this may sound crazy to you, but I’ve known many people, including myself, who have, at times of stress, wished for bad things to happen.

I’ve even known people who’ve wished for “bad” things to happen to themselves so they could feel even more like a victim and get sympathy from others.  It’s that old pattern of wanting negative attention if there’s no positive attention available.

Wishing bad things on anyone is wishing for a punishment.

And that’s one of the key components of the ego thought system.

The ego thought system is one of sin and punishment.

When people don’t like what someone’s done, they jump on the punishment bandwagon.  People talk about punishment as a deterrent, but it really doesn’t work.

Punishment is for those who blame and shame.

Hoping something bad happens to themselves, people are often looking to get some kind of justification for feeling like a victim, or even to punish others.  When I was much younger, I definitely saw myself wishing for bad things to happen to me so that others would feel bad, that it was their fault.

Some people try to hurt their loved ones by hurting themselves.  It’s definitely insane.  And that’s what the ego is, pure insanity.

People feel unworthy of Love and sometimes they wish for something bad to happen to them so that people will have sympathy for them.  They feel it’s the only way they can get attention or kindness.  It never feels good, but, to some, it’s better than no attention all.

Wishing punishment on others only intensifies the guilt we feel, and then we feel we deserve to be punished.  It’s a destructive cycle we can break out of by being aware and practicing kindness.

His Holiness, the Dalai Lama has said that his religion is kindness.  That really resonates with me.  I aspire to be kind always and I am getting closer every day.  When we’re forgiving ourselves and others, we’re practicing the ultimate kindness.

In our current political climate, I’ve heard people wishing for economic hard times because they believe then the current president wouldn’t be reelected.  I get that, but it’s not what I wish for.  I wish for Love and kindness to be valued.  I pray that truth is revealed and Love prevails.  I feel it happening and so I don’t even need to hope for good.  I know it is happening now.

Truth is being revealed now.

Have you had a time when you wished for something bad to happen to someone or to yourself?  Have you forgiven yourself?  If not, there’s no time like the present!  Please share in the comments below!

I’m getting ready for my Stop Playing Small Online Retreat on September 18. If you’d really like to do this healing work of letting go of complaints and the other things that stand in our way of happiness and Peace, consider joining me. You can change your entire life, your relationships, your experience, your finances, your body, your happiness and peace of mind. Consider this:

You won’t regret your choice, and you’ll only be so glad you did – at least that’s what I hear from the people who’ve done it.

Get going.  Take action.  Be aggressive about working with your mind.  DO NOT DELAY.  If you’re waiting, if you’re not getting the results you’d like, what are you waiting for?

Don’t take my word for it, read the testimonials from those who have done this work with me.  They believed that nothing would work for them, and they were willing to do something different anyway.  Now, they’re not playing small anymore.  They’re not letting fear dictate their life.  They have a real and powerful connection with Spirit.

If you’re ready to make a change, and you’d like some REAL support to make a LASTING change, TAKE ACTION! If you’re interested in either my Stop Playing Small Online Retreat or Finding Freedom From Fear Online Spiritual Bootcamp, but you aren’t sure if either is right for you right now, book an Exploratory Call with one of the spiritual counselors. The call is free and you’ll find benefit in addition to getting all your questions answered. Click here now to book an Exploratory Call with a Spiritual Counselor.

TODAY’S A COURSE IN MIRACLES PODCAST EPISODE:  my topic today is The Second Law of Chaos.  You can listen in LIVE on my podcast - click here for details - or you can click here to get the download later at iTunes or Stitcher for Android. All the previous episodes are free at iTunes & Stitcher right now!  Transcripts and more are available here:  LivingACourseinMiracles.com You can subscribe to the podcast and get the show every week automatically on your phone, iPod, iPad or computer.  Check it out!  And if you enjoy the podcast, will you please write a review so more people find the show? The more reviews, the more iTunes and Stitcher show it to people!  Also, if you listen on iTunes, there’s a 2nd podcast called A Course in Miracles Archive for the older episodes.  Thank you!

I appreciate your support!  I enjoy offering the daily writing and prayer and it’s a gift to me to be able to share.  You can help me by sharing and commenting on social media.  So many are looking for inspiration - let’s be a support to those who are searching!  Thank you for caring and sharing!