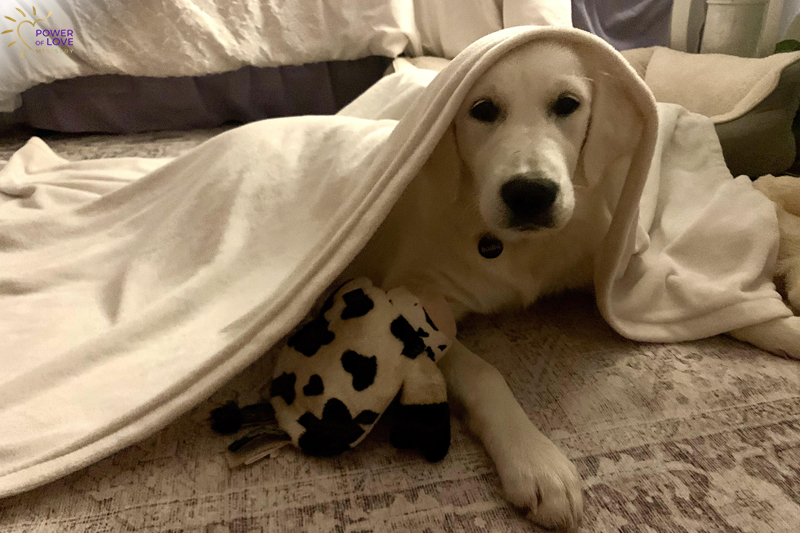 Monday night after my Masterful Living class I had a couple of hours of work left to do and then I needed to clean up the kitchen and get to bed. I was playing with Bodhi and just about to tidy the kitchen when I found a tick on her face.

The tick had been there for a few hours perhaps and was becoming engorged. Ugh.

Last week I found a couple of ticks on the top of her head and had a friend help me to safely remove them. It didn’t go great, but it went.

I have that special tool you need to get ticks off. Fortunately a few weeks ago Spirit let me know I’d be needing it and I got one. Phew!

The thing is, holding Bodhi still, while trying to remove the critter wasn’t easy. She didn’t want to have anything to do with being held still for so long – and it does take a while to do it properly.

You have to gently pull and rock the tick so that it let’s go safely.

We worked in short sessions until she couldn’t stay still any longer and then I’d let her go – I didn’t want to torture her, although she knew I was doing something to help her.

It was really challenging – more so because I was using a sharp metal tool just above her eye and I didn’t want to poke her in the eye when she squirmed, and I also didn’t want the tick to break off, leaving it’s disgusting head inside her or other worse things that I don’t wish to describe. Yuck.

Of course, I’m talking with Bodhi, explaining what I’m doing and that she needs to help me help her, in that type of Jerry Maguire panic.

I ran out of salmon treats and broke out the rabbit treats. I thought the treats would calm her down and help her to think of this as having beneficial aspects.

I found it so challenging.
I was so tired.
And I had such a full day the next day.
And I really just wanted that THING off of my sweet pup.

At one point, as she was escaping and going off to regroup in the next room I started to cry. Bodhi stopped in her tracks and turned back to me. She became more willing and I became more focused with being able to hold the vision of success in my mind.

Somewhere around midnight, the tick finally let go and I was able to clean the wound and then the kitchen and then meditate, pray and go to SLEEP at last. By the time we both went down it was after 1am.

It was a bit of an ordeal. Definitely stressful.

And yet, I wasn’t worried. I wasn’t afraid of a negative outcome, I had fretted about how long it might take and then I made up my mind that it was happening NOW, and that’s when success happened.

Bodhi is growing up. She’s beginning to realize that we’re a team and we can help each other.

When she realized that I was really feeling challenged she became more amenable and we got the job done. She felt me and she shifted. I was grateful.

And, in the end, not only did we succeed together, she got a whole lot of treats. It was a win-win!