Letting the Love In! 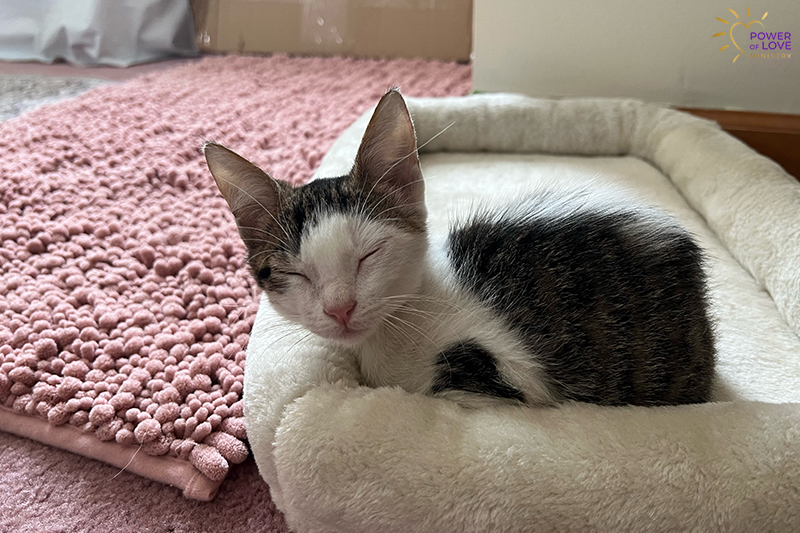 Meet Sattva! The newest member of our family.

Click here to listen to the Prayer for Today-Letting the Love In!

Before I even got Bodhi, my puppy, I knew I would like to have a kitty companion for her.  It’s taken me eight months to find the kitten that would be perfect for us.  I’ll tell you the story another time.  I’m writing this just before bed and it’s late and I’m wiped from a very full day.

Bodhi and I picked up Sattva this morning and Bodhi, understandably, was beside herself with excitement when we brought him home.  Bodhi’s a golden retriever and they pretty much automatically adore every being they meet.

Sattva is about 11 weeks old and he’s pretty small as you can see by this picture of him next to my hand.

In addition to all the excitement with Sattva, we took care of a friend’s dog because they were moving and Bodhi really needed some doggie playtime.  Bodhi is coming to the end of her first heat and she’s really not been able to play with some of her best friends because they aren’t neutered.

The dog we played with today, I had thought was “fixed,” but he’s not.  So, Bodhi had to wear her chastity belt (It’s like doggie underwear) and our furry friend just would NOT stop humping her even though he couldn’t actually get beyond the panties she was wearing.  Still, it was exhausting for all three of us.  He’s a sweetie, and he couldn’t help himself.  Hours and hours of relentless futile humping wore us out.

Then at one point I thought I lost Sattva.  I’m keeping him temporarily in the guest bedroom so he can acclimate and not have unexpected encounters with Bodhi.  I had gotten something from the closet and didn’t realize he jumped in there.  An hour later when I couldn’t find him anywhere, I finally realized my error and there he was, curled up asleep on a comforter in the closet.

Then, Bodhi, Sattva and I had a long play session together in the guest room and Bodhi was the very essence of barely managing her excitement and almost losing it.  She did SO well.  The two of them were unbelievably cute together and I didn’t take any pics, because I just wanted to be in the moment with them, and also I left my phone downstairs.  They were SO adorable!  The friendship has begun!

Mighty companions all the way!

3 Responses to “Letting the Love In!”

This Week's PODCAST EPISODE:  my topic is Stop Going It Alone.  You can click here to get the download at iTunes or Stitcher for Android. All the previous episodes are free at iTunes & Stitcher right now!  Transcripts and more are available here:  LivingaCourseinMiracles.com You can subscribe to the podcast and get the show every week automatically on your phone, iPod, iPad or computer.  Check it out!  And if you enjoy the podcast, will you please write a review so more people find the show? The more reviews, the more iTunes and Stitcher show it to people!  Also, if you listen on iTunes, there’s a 2nd podcast called A Course in Miracles Archive for the older episodes.  Thank you!