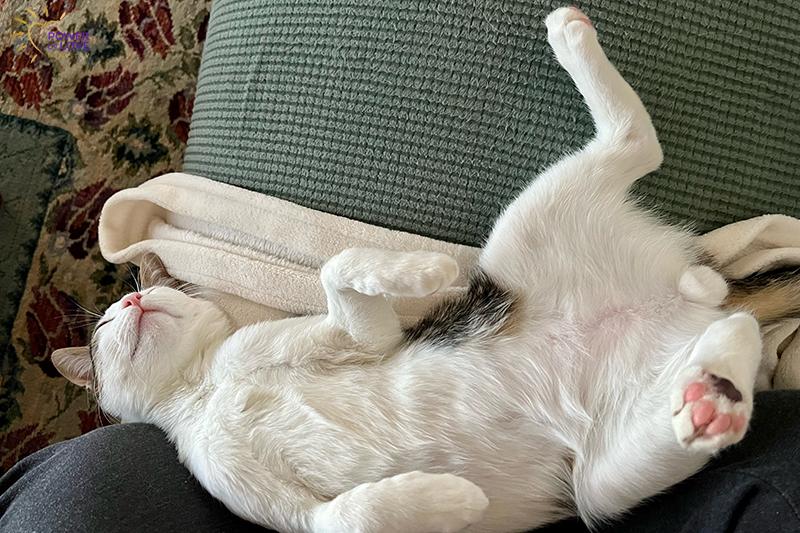 Sattva survived his adventure and rested most of the day.

Click here to listen to the Prayer for Today-Ease and Grace All the Way!

It’s such an intense time for so many of us now.  Even if we’re not bothered by world events, we can’t help but be affected by how upset so many people are.  I know I feel it strongly.

I’m having some intensity and drama closer to home with my kitty Sattva.  If you read my Daily Shot of Spiritual Espresso on a regular basis you may be aware of some of the escapades.  Well, here’s the latest.

Saturday evening, little Sattva managed to get out and roam around the yard.

He’s getting bolder and bolder and it’s hard to keep him inside.  I do my best, but I don’t wish to be anxious or fearful about keeping him in.

I do need to be careful because there are many predators here: coyote, bobcat, fox, hawk, eagle, owl, and bear.

Saturday night, Sattva went out and didn’t come in when I called.  I finally went to bed and then I awoke around 2am and when I went downstairs and called outside, he finally came in.

Sunday night, he did the same thing, except he didn’t come in when I called at 2am.  It had started to rain and I thought perhaps he’d found a good place to hide out of the rain.

I tried calling on the front, back and side of the house a number of times, in the rain, until about 8:30 when with the rain lightening up, I took Bodhi out for a quick walk around the property.  I was calling to Sattva, and then I heard him calling back!

It turned out he was up in a tree – WAY up in a tree and it was well beyond his skill to climb down.  It was a bit of a production to get him down.  I managed to find a friend in the hood who had an extension ladder and another friend who could bring it to me and help me with it.  The tree was surrounded by bushes and rocks and getting a perch was challenging.  I had to climb up much higher than I would have liked and Sattva didn’t want to let go.

All of this was also in the pouring rain.  Sattva was trembling, soaked and scared.  He didn’t want to let go of the tree. I managed to throw a towel over him and finally could get him to come to let go and get ahold of him.  Once in my arms he was SO relieved.  As was I.

He recovered fairly quickly but didn’t do much besides eat, sleep and snuggle all the rest of the day.

When I discovered him up in the tree, I put the call out for prayers to folks in the ministry and that lifted us up immediately.  I knew all would be well and I wasn’t worried or upset, but I did wish to get us out of the rain and home safe and warm.  Bodhi was upset that Sattva was meowing in distress and stuck in the tree so I put her in the house so she would be able to stay calm.

Prayer is so incredibly helpful.

I asked for prayers of ease and grace, and I did feel them anchoring us in knowing that all would end well, as it did.

I did have the thought several times during the night that Sattva’s not coming in, and having to be out in the rain would teach him not to run off at night.  I didn’t energize it, because each time I had the thought I’d feel the unkindness of learning through difficulty and then I’d energize that he’d be safe and sound and dry, out of the rain.

He certainly had a miserable adventure.  Which I do feel I contributed to.  I don’t feel guilty, but I learned from it.  I don’t wish ANYONE to learn through any kind of difficulty anymore – there’s a better way.

We can learn through direct insight.  That’s how I choose to learn.  And, even though I say learn, I really mean that we’re remembering through letting go of false beliefs.  We’re awakening.  Ease and grace all the way!

One Response to “Sattva’s Adventure”